In this blog entry, I will argue that the design principles of vernacular architecture cannot be reduced to static typological interpretation of physical forms. One must also account for the role of syncretism in the historical development of vernacular forms. According to John Michael Vlach, the historian most responsible for discovering the African roots of the Shotgun house, syncretism is a design strategy migrant communities have used to preserve their material cultures as they move into new cultural environments (Vlach, 1991). For Vlach, migrants look for similarities between design elements in their home cultures and those in their new contexts to create forms that preserve the central aspects of their material culture. Such a social conception of architectural invention challenges typological assumptions that the essential character of vernacular forms can be yielded by a geometrical study of patterns found in material forms. The theory of syncretism compels us instead to consciously associate the material aspects of vernacular forms with the cultural processes that are responsible for bringing them into being. The historical development of the Shotgun house demonstrates the active and dynamic processes that should be associated with vernacular architectures.

John Michael Vlach demonstrates the architectural importance of syncretic design strategies for enslaved Africans in Haiti by tracing the historical evolution of the Shotgun house (Vlach, 1976). According to him, this development took place in three primary stages, which are illustrated in the diagram drawn above. [Figure 1] The first step can be found in the simple hut forms that were native to Yoruban tribes in Nigeria. These huts, called the Apuja, consisted of waddle-and-daub wall construction that was capped by a thatched hip roof. [Figures 2, 3] The primary wood elements of this design were rough-cut lumber that was overlaid with waddle-and-daub infill. When Africans from these tribes were sold into slavery and transported across the Atlantic to the West Indies, they brought their native constructive forms with them. In order to adjust to the hardships of slavery, these Africans adapted select aspects of local houses found in Haiti that best fit their own pattern of making. This initial step away from native housing typologies required a real-time mental process of assimilation that served as an informal method of design.

In his 1979 essay, Vlach describes the similarities that existed between the Apuja house forms, the Bohio house form (a native house form used by the Arawak Indians in Haiti), as well as the subsequent emergence of the Maison Basse house form (a French plantation house form). The Apuja and Bohio houses were both two-room dwellings, although only the doorways in the latter were arranged along the straight axis that is commonly associated with the Shotgun house today. The Bohio form of the Arawak Indians also made room for a front porch that was passed onto the Shotgun houses found in the United States. [Figures 4, 5] Even though the Apuja and the Bohio house forms both used hip roofs, only the Bohio revealed the rough cut wood structure along the façade of the building. Vlach suggests that African slaves also borrowed from the house forms invented by French slave owners living in Haiti (Vlach, 1976). According to Vlach, these slaves were trained to replace rough-cut lumber construction with the mortise-and-tenon techniques used by French plantation owners. It was at this stage that the traditional hip roofs of both the Apuja and Bohio houses gave way to the gabled roofs of the Maison Basse form. [Figure 6] After slaves in Haiti and Santo Domingo successfully revolted against the French, freed Haitians began living in and expanding shotgun houses as a new form of middle-class dwelling. It is important to note that it was the change in social circumstance that prompted formal experimentation. This history led Vlach to state, “The house was a signal of difference and independence. It has been referred to as an architecture of defiance (61).” 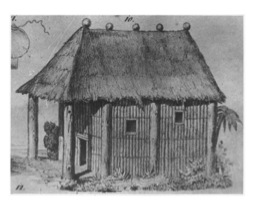 The third stage of the syncretic development of the Shotgun house consisted of its migration to the United States by means of free Haitian immigrants from the West Indies to New Orleans. Some of these migrants were carpenters and builders, and thus continued their syncretic process of adjusting native housing forms to fit the technologies and lifestyles of the New World. [Figure 6] However, as the shotgun house began to be used by freed slaves in the United States the relative middle-class status of these Haitian dwellings was downgraded to fit the new social position of residents in the United States:

As a structure, the shotgun house is a symbol of architecture created to express life lived in transition, life that is not fixed or static. It is the primal architecture of the displaced person, of one who lives a fugitive existence, always on the move. The shotgun house was for African-Americans a space of transition. One was not meant to live one’s life in a shotgun house. It was a space in which one moved into to move on. (Hooks 2004)

It is important to note that the design of the Shotgun house is interpreted here as emerging from a dynamic process, defined through the social needs of migrant communities. It is not defined in the ‘fixed or static’ terms of geometry or type forms. Since the user and the designer were usually one and the same group in Haiti, there was little danger that the designer might misinterpret the essential elements of the Shotgun house. 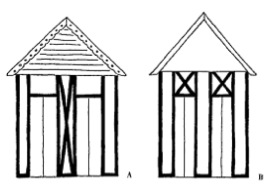 Vlach’s research on the Shotgun house implicitly outlines an alternative means of conceptualizing the architectural significance of vernacular buildings. The material characteristics that most readily identified the Shotgun house as a vernacular typology – the axial arrangement of its door openings and the presence of an ornamented and gabled front porch – are significant in so far as they reflected the social needs of each cultural group that used the form during a specific time period. Just as the slave revolts in Haiti provided the social context necessary for African descendants’ physical experimentation with the Maison Basse form, so did the new social classes of freed Blacks in New Orleans further impact the syncretic evolution of the Shotgun house in the United States. The needs in question were not simply programmatic; they included the preservation of a material culture that was in real danger of disappearing as a result of the Atlantic slave trade or the social conditions of the New World. While re-envisioning architectural design as an activity open to anonymous social groups may diminish the relative prestige of the professional architect, accepting this process provides us with a clearer understanding of the informal patterns that mark our contemporary world. It also prevents us from depending on static interpretations of type forms to overdetermine the meaning of contemporary forms.

3 thoughts on “The Trouble with Typology: Exposing an Essentialist Model of Cultural Analysis”